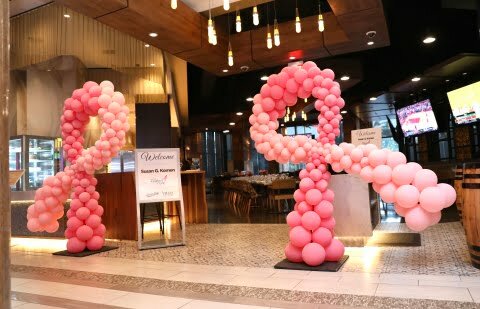 The foundation was represented throughout the property last month, emphasising an aim to “reduce the current number of deaths from breast cancer by 50 percent in the US by 2026.”

Pink, the Komen Foundation’s official colour, could be seen in October’s Viejas organisation on signs, displays and clothing of visitors and team members who were personally affected by the most common cancer among women worldwide.

“The entire Viejas family is truly inspired by the sheer immensity of support that Viejas guests and team members have demonstrated towards this worthy cause,” said Jim Wild, general manager of Viejas Casino and Resort.

“For the entire month of October, proceeds from Viejas events as well as donations made at the buffet cashier station have added up to a sum that surpassed our most hopeful expectations.”

Viejas expanded its support through the launch of the ‘Pink Ribbon Martini,’ created by in-house mixologists in front of an ‘ Awesome 80s Prom,’ an experience that saw all the donations made to Komen San Diego.

“The turnout for the Awesome 80s Prom was absolutely fantastic. Everyone really got into the 1980s vibe and had a great time knowing that all the fun was for a great cause.”

“Every dollar given at the buffet helped push us past our contribution goal. It’s a true testament to the compassion of the guests at Viejas, they really are the best guests in the world. They know how to have a great time, and they are also very thoughtful and charitable people.”

Last month, Viejas launched a new initiative called’ Heroes Club,’ a reward programme designed to give back to those who serve and their dependants.