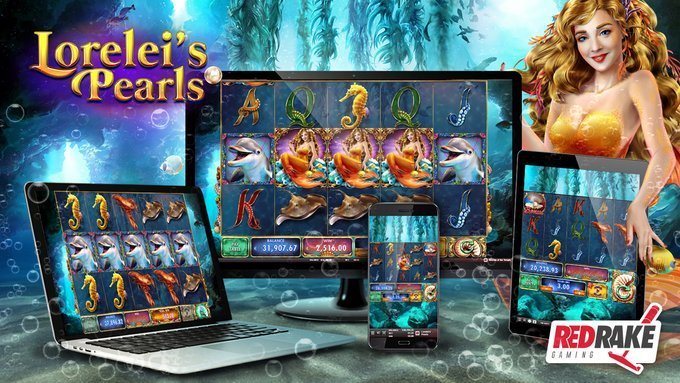 The Valencia-based company used an official press release on Thursday to announce that its new three-row video slot is a mermaid-themed advance that offers fans the opportunity to walk away through its Fusion Minigame bonus round with awards worth up to 2,000 times their triggering stake.

Red Rake Gaming, which has also released its video slots Million Dracula, Super 15 Stars, and Secrets of the Temple in recent months, said its new mobile-friendly Lorelei’s Pearls invites online casino players to ‘venture out to the deepest ocean’ where they can expect to locate the eponymous singing protagonist of the title so that they can be rewarded with a lucrative 15 free spins.

Read Red Rake Gaming released a statement which read: “If the player gets three bonus symbols on reels one, three, and five they will trigger the bonus feature with 15 free spins. This feature will allow them to play with symbols of a much higher value so as to obtain much bigger wins.”

In addition, the developer confirmed that Lorelei’s Pearls comes complete with a soundtrack “that will transport players to the most beautiful beaches” while also being included in its newly launched progressive tournaments tool to “increase excitement levels even further.”

The statement continued: “The most exciting feature of this new video slot, which has already been massively popular in our previous games, is the Fusion Minigame. This gives players the opportunity to combine Lorelei symbols to form even larger symbols and win up to 2,000 times their bet.”

The best loved feature ‘Fusion Minigame’, free spins feature without low symbols and the possibility to win up to x2000 times your bet!