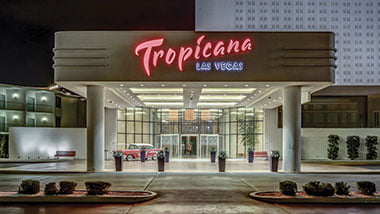 Penn National Gaming announced on Thursday it’s evaluating unsolicited offers to buy the casino hotel or its real estate in Tropicana Las Vegas, although it added that a sale is not imminent. The company has considered dealings with the goal of faster debt reduction as it focuses on “moving customers around it’s network.”

The company executives shared details of their third-quarter earnings in a conference call and said they received offers for the Tropicana and the slot route company in Illinois, Prairie State Gaming.

In response to an investor’s question, as reported by the Las Vegas Review-Journal, Chief Financial Officer B.J. Fair said: “We have a couple of wholly owned, very valuable assets in our portfolio that we believe are not appropriately valued in our share price today, and there have been recent transactions, both in Las Vegas on the Strip as well as in the route operation business in Illinois, at very attractive multiples in both cases.”

“We continue to receive some unsolicited interest in Prairie State Gaming, as well as some of the land holdings we have in Las Vegas at Tropicana, so we’re continuing to engage in those conversations,” he said. “We’ll see where they take us. We’re encouraged by some of those conversations, but nothing’s done until it’s done, but we would certainly consider, if anything were to materialise in either of those cases, to continue to deliver faster than what we’ve laid out.”

“I would call it an evolution of our thought process,” he said. “It doesn’t mean that the hub-and-spoke model of the Las Vegas Strip with regional assets across the country is flawed. We don’t think it’s flawed. We think that it does still make sense.”

But Penn’s CFO added that the national growth of gaming has allowed the firm to reassess the need for a Strip property. Given this conversion of interactive between sports betting and (internet) casinos, which is quickly proliferating across the country, we think that it’s going to be even more important for us to have a very localised on-channel approach where you’re engaging with guests both digitally as well as in brick-and-mortar casinos,” he said.

“It doesn’t mean that the Las Vegas hub-and-spoke won’t work or isn’t working. It just means that we believe that we’re going to be very focused on moving customers around our network, and that’s going to happen at a more local level across our 40 properties in 19 different states and across the interactive activities that we’re offering our customers in markets where it’s legal.”

Two companies in Las Vegas recently announced property sales while retaining their casino operations as a way to improve cash flow. Caesars Entertainment has announced Rio’s sale to Imperial Companies for $516.3 million, while MGM Resorts International sells Bellagio for $4.2 billion to the Blackstone Group. At earnings report this week, MGM said a similar real estate deal is in the works for the MGM Grand, with future opportunities for Aria and Vdara sales.

J.P. Morgan gaming analyst Joe Greff said in a note to investors that the value of Penn might ultimately be increased by a strategy to sell the Tropicana or the slot route company.

In an earnings release, Penn CEO Tim Wilmott, who is planning to retire by the end of the year, said the company capitalised on the opening of sportsbooks in Iowa, Indiana and Pennsylvania and the introduction by one of its partners of a mobile sports betting app in West Virginia.

Future CEO and current Chief Operating Officer Jay Snowden said Penn National is still speaking to a number of potential sports media partners. “We do envision having partners, potentially, that we will be thinking about how we can engage with their customers who are sports enthusiasts at this point. And then of course, once they become part of our sports betting database, [we’ll] introduce them to our casino product as well,” characterising the direction of those talks as encouraging.

Boosted by the national growth of sports wagering with new properties, Penn said Thursday that its third-quarter revenue increased by 71.6 percent to $1,355 billion, and net revenue rose by 21.1 percent to $43.7 million, or 38 cent per share. As a result of the completion of its $300 million acquisition of the Greektown hotel-casino in Detroit in May, the company, which also operates the M Resort in Henderson, saw revenue and profit increase. Adjusted EBITDAR increased to $407.9 million, a year-over-year rise of $178.2 million, with an Adjusted EBITDAR margin of 30.1%, up 100 basis points year-over-year.

But the company has still not met the expectations of $1.37 billion in revenue and earnings of 42 cents per share from analysts. As a result of the opening of Wynn Resorts Ltd.’s Encore Boston Harbor, Penn also said revenue fell more than expected at his Plainridge Park Casino in Massachusetts. That venue is less than 40 miles from the Wynn property opened in June and both companies are attracting customers from the Boston area.

“Our development projects in Pennsylvania, the $120 million Hollywood Casino York and the $111 million Hollywood Casino Morgantown (both inclusive of the gaming license fees), remain on track,” said Wilmott. “Construction of the Morgantown project is well underway, and we expect to commence construction activities at the York site soon. We anticipate approval from the Pennsylvania Gaming Control Board for our York project in November. Both facilities are scheduled to open in the fourth quarter of 2020.”