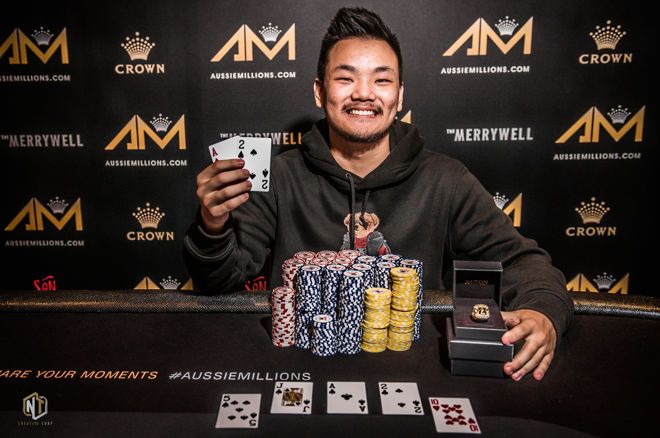 It took six days to create a champion out of 1,665 players from the Opening Event field, but Jo Snell took the Aussie Millions Championship ring and a massive A$ 341,325 after a heads-up victory against Samuel Jefferies.

With the Crown Casino and poker players doing their best to raise money to help Australia fight the destructive bushfires that in the great country killed an estimated half a billion animals, the activity at the tables was just as generous as the charitable donations.

Just 14 players took their seats and it wasn’t Snell who had the edge, but players like Jonathan Karamalikis hanging around the lead for the early part of the action. Snell reached the final table, but many other highly decorated players did not, with WSOP champion Joe Hachem’s son Daniel Hachem coming in 32nd for $5,975), former WSOP Main Event champion Martin Jacobson busting in 21st place for $9,555 and overnight chip leader David Tang delivered a $11,095 five-figure score from proceedings in 18th place.

Karamalikis was still very much in contention as the final table arrived, aiming to win his second ring in the course of the Aussie Millions Championship. In 10th and 9th place respectively, Andrew Shanahan and Bo Jin bowed out before one of the day’s most critical hands went down. Snell and Sohrab Rezvanpour got their money in the middle with both players holding premium hands, but Snell’s pocket kings were ahead of Rezvanpour’s pocket queens and remained that way through the board to remove a dangerous player and successfully rocket Snell up the leaderboard in the process.

By the time Karamalikis finished third, falling short of his vision, Snell had the chips and used his lead in his heads-up duel with Sam Jefferies to have a good effect. Jeffries was unable to recover and the job was done by the less-experienced man. In doing so, Snell won an AUS$341,325 career-high score and took his career earnings to over half a million Australian dollars, as well as giving him the award that can not be purchased–the ring of the ANTON Jewellery Aussie Millions Championship.

From an enormous field of 1665 entries over 5 Flights, just one man remains standing!
Congratulations to Queensland’s Jo Snell who just took out the #AussieMillions ANTON Opening Event Championship ring for a whopping $341,325 after defeating Perth’s Samuel Jefferies ($210,775) pic.twitter.com/aTcZKbRpnD