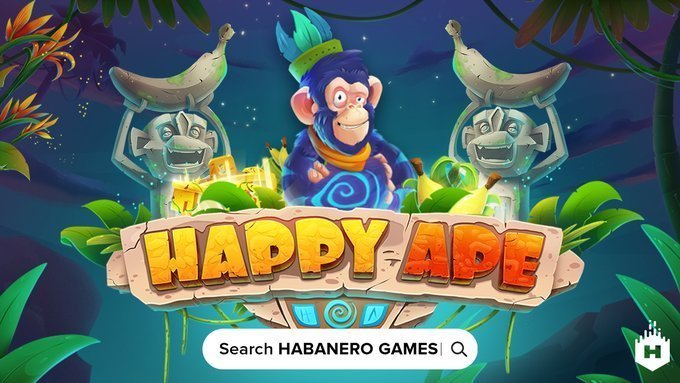 The innovator used a press release released by European Gaming Media and Events on Tuesday to announce that its new three-row video slot has entered a portfolio that has already included some 170 games, such as the recently launched Jellyfish Flow title, and invites players to embark on a jungle adventure in search of exciting prizes.

In addition, Habanero Systems BV confirmed that the mobile-friendly Happy Ape would give bananas to iGaming fans as they attempt to unlock the chest of the game to discover modifiers and additional multipliers with as many as 36 free spins awaiting anyone fortunate enough to obtain at least three scatter symbols.

The press release was used by Toni Karapetrov, Head of Corporate Communications for Habanero Systems BV, to describe the immersive Happy Ape as a ‘tropical title’ that also comes complete with the Ape Smash bonus where non-winning combinations are removed for six more wild symbols on the reels to ‘guarantee prizes’ alongside the Banana Toss feature.

Read Karapetrov ‘s statement: “With a colourful treasure chest containing modifiers and multipliers, players can swing from win to win while enjoying the game’s stunning graphics and pitch-perfect sounds. We are confident that this slot will prove highly effective for operator partners looking to on-board new customers as our acclaimed offering continues to attract an ever-growing legion of players from across the globe.”

Happy Ape is out!

It is a lively 5×3 reel with the chance to win random chest prizes. The fun features, Ape Smash and Banana Toss, make it a hit for players!